Dermot Kennedy Releases “Innocence and Sadness” – Something Old, Something New

“Innocence and Sadness” is the fifth track Dermot Kennedy has released off of his upcoming album, “Sonder.” Kennedy is an Irish singer-songwriter who tends to write within the alt-folk genre with some contemporary accents.

The production of Kennedy’s songs are very well developed to fit his unique voice. He has a raspy, deep voice, so the styles of his songs tend to lean more acoustic to highlight the lyrics instead of the production. Since Kennedy’s lyrics are very poetic in nature, the simple production helps the complexity of the words to not get lost behind flashy instruments and bass-lines.

Many of Kennedy’s songs reflect on love within pain, and this piece contains the same themes. The lyrics talk about a girl who uses her innocence to cover up the pain she is experiencing. However, there is another theme of taking on someone’s pain because you love them, but not realizing that doing that will kill you both slowly. Kennedy paints this image of desperately giving yourself over to the pain of someone else so beautifully, using lines like, “let your tears erode my shoulder like a cliff side” and “I’ll sing into the cold dark night till you listen.” 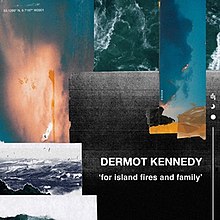 “For Island Fires and Family”

Dermot Kennedy released “For Island Fires and Family” on an album that was a collection of his popular singles. “For Island Fires and Family” was unreleased before this album dropped in the beginning of 2019. The album that it is on, named “Dermot Kennedy,” is technically the first album Kennedy released. However, all of the songs were already released, so it isn’t considered Kennedy’s first album.

The production of this song is very similar to Kennedy’s newer works, staying acoustic and simple. However, this song utilizes layered background vocals, which gives it a haunting effect. The song switches between the simple guitar and the more layered background, which makes this song interesting to listen to.

The song is probably the most poetic song Kennedy has released. He has said that this song is “about remembering a place where you want to be, or a person who you want to be with, when you are going through bad times in your life.” That may be the main theme of this song, but you also hear lines that point to the beginning stages of a relationship, of the first fall into love. It is about learning how to love someone, and subsequently, learning how to lean on them when times get hard.